Sushant Singh Rajput’s case is facing new twists and turns everyday. The Kai Po Che actor died by committing suicide, as per reports, in his Bandra apartment. The actor was suffering from clinical depression. But his fans and a few celebrities are not taking a back seat as they are convinced that the actor was murdered. Celebrities like Kangana Ranaut and Shekhar Suman have been upfront about their approach. On Tuesday, Sushant’s father, K.K. Singh filed an F.I.R. against Rhea Chakraborty and her family. The F.I.R. was made on the grounds of abetment to suicide, cheating and many more.

Now BJP MP Subramanian Swamy has spoken about the same. He has recently taken to Twitter to share why he feels the actor was murdered. This comes hours after Anil Deshmukh, Maharashtra’s Home Minister, has declared that there will be no CBI probe in this matter. The MP has shared a list of points in suicide and murder theory. According to the list., there are only two points supporting the suicide theory, they include, anti-depressant drugs found in his room and his absence from social media. While the other list from the murder theory, he has mentioned 24 out of 26 points. The points which indicate it was a murder are, no eye pop out, no froth from mouth, Sushant changed sim cards, Disha Salian’s suicide, his marriage plans next year, absence of financial crisis and many more.

Check the list of the suicide and murder theory below- 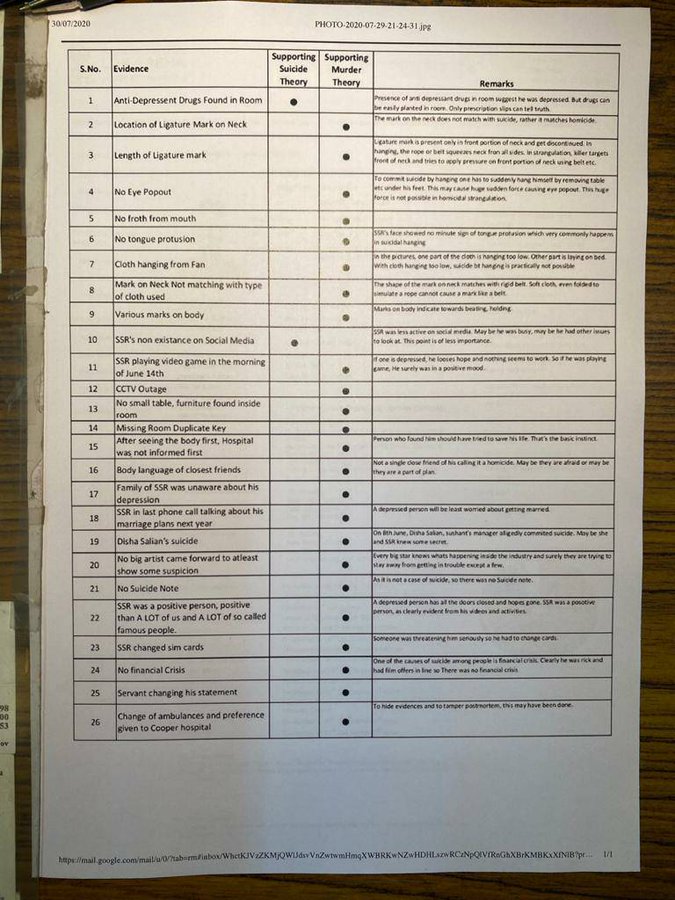 He captioned the image as, “Why I think Sushanth Singh Rajput was murdered.”

Why I think Sushanth Singh Rajput was murdered pic.twitter.com/GROSgMYYwE

He also wrote, “Patna Police has investigated and registered an FIR on several offenses SSR mysterious death but Mumbai Police has not got beyond Inquest under Section 174 of Cr. PC and not registered a criminal case reveals the possible mindset of Mumbai Police. (sic)”